Joey Seeman is Not Your Average ’80s Hair Metal DJ


I first became aware of Joey Seeman a few years ago after stumbling across his Instagram account. His aesthetic was straight out of a Mötley Crüe video and he looked like he could be a member of Def Leppard. I had no idea who he was or what he was doing and wasn’t even sure if he was a real person. I eventually learned that Seeman is an ’80s hair metal DJ with a weekly gig at Double Wide. He is also a nationally recognized artist. And he even worked with a punk rock icon.

For years, Monday nights have been interesting in Dallas. It is often a great night to catch some of the most interesting local music. At RBC, Outward Bound Mixtape Sessions is currently a perfect example of this. But at the other end of Deep Ellum, there is Double Wide, a bar that actually looks like a trailer and revels in white trash aesthetics. Every Monday, a guy who looks like he was an English rock star back in the ’80s plays ’80s hair metal hits complete with the trashy music videos projected on a screen behind him.

Walking into a bar that looks like a doublewide trailer is odd enough on its own. But entering the place while the video for “Gypsy Road” by Cinderella is playing is enough to make anyone’s jaw drop. Joey Seeman, AKA DJ Joey Scandalous, has been doing this for over five years. He even played music in between sets at Bomb Factory on a bill that featured acts like Slaughter, Kix, King’s X, Lynch Mob, and BulletBoys. 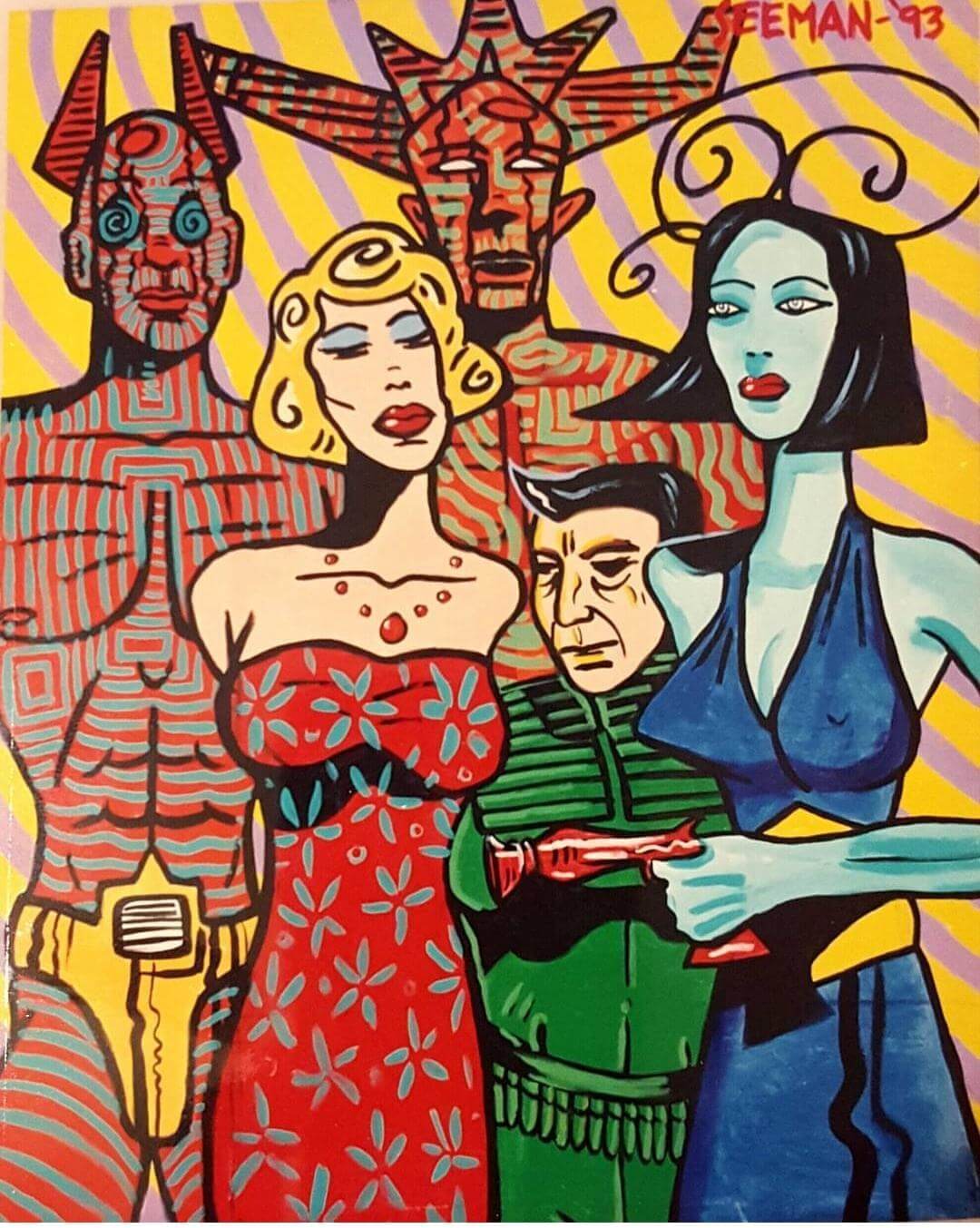 “I grew up in the ’80s,” says Seeman, who grows his bleach blonde hair out and often punctuates sentences with a larger-than-life laugh. “So I was totally into hair metal when I was a kid. I had the hair and the makeup and the whole fucking thing.”

But he is also a nationally recognized painter from Miami’s South Beach art scene in the early ’90s. With works influenced by German Expressionism, WPA murals, and science fiction, Seeman has been covered by national publications like Juxtapoz Magazine, Spin, Vogue, and Tattoo Savage Magazine. Fashion Designer Anna Sui commissioned him for sportswear and he exhibited work in a show that also included Cindy Sherman.

Seeman is now an ’80s hair metal DJ, but he actually has closer ties to punk. He spent years working with David Harrigan AKA Tomata Du Plenty, the late frontman for The Screamers, the legendary techno-punk group from the ’70s L.A. punk rock scene. Originally from Miami, Seeman relocated to South Beach in 1992 after Hurricane Andrew.

He had decided to move to South Beach after meeting Harrigan, who had left punk rock, started an art career, and moved to Florida.

“He was always an artist in some way, whether it was performative or gallery,” Seeman explains. “I had met him and saw that he was giving a drawing class, so I obviously decided to take it. I got to know him and he was just this total fucking sweetheart guy. So I moved to South Beach to be closer to that dude and be an artist.” 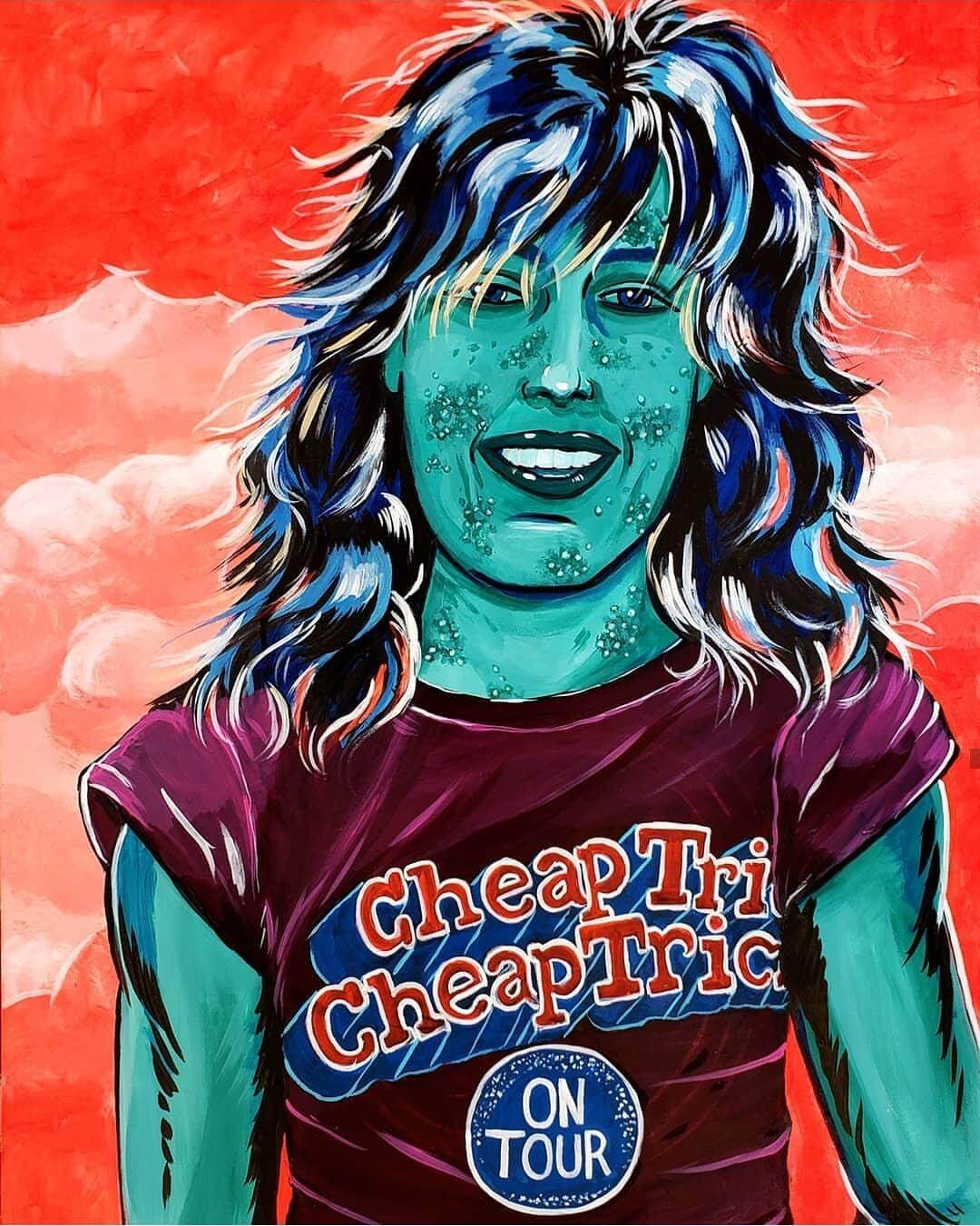 Seeman ended up moving down the street from Harrigan. The two became fast friends—Harrigan didn’t have a car so Seeman drove wherever they went—and started doing gallery shows together.

“He painted in a very primitive way,” Seeman says. “He was a totally unschooled outsider artist. He would take pages out of books and draw figures on the pages and he would do wood cutouts. He was also involved with a theater down there and he would do set designs. He would do anything.”

Anything except music, that is.

“When he got into punk rock in L.A., he saw it as anything was possible,” Seeman says. “But then punk became very regimented and hardcore. It was stylized, militant, and aggressive and he just didn’t want to be associated with that shit anymore. He was just the nicest, friendliest guy.”

At first, the gamble seemed to be paying off. Seeman quickly got press and sold paintings. But it ultimately wasn’t enough to live on. Within a couple years, Harrigan relocated to New Orleans and Seeman moved to Texas in 1995 to study computer animation at the Art Institute of Dallas. He has now been working as a graphic designer for several years.

But over the last few years, Seeman has been reconnecting with bands like Poison and Stryper every Monday night. He has shown his work at local galleries and ’80s hair metal aesthetics have even influenced his style. His latest series features metalheads with pimply faces.

“It’s music that doesn’t take itself too seriously,” Seeman says. “I equate hair metal with comfort food. It’s like going to Denny’s. You know what you’re going to get, you know how it’s going to taste, and you already know how the music is going to make you feel. It’s not like when you go to a Mogwai show where you have to think about the music and everyone is standing there with their arms crossed and a stern look on their face. It’s party music and it’s fun. It’s timeless and it connects.”